Scientists are not above, nor are they below, indulging in the sport of racing. This new study tells how a bunch of scientists arranged for a bunch of cells to race. “Chemotaxis is the ability to migrate towards the source of chemical gradients…. Because of the complexity of human genetics,Dictyostelium [whose ability to solve puzzles has led to two Ig Nobel Prizes, so far]] and HL60 cells have long served as models system for studying chemotaxis. Since many of our current insights into chemotaxis have been gained from these two model systems, we decided to compare them side by side in a set of winner-take-all races, the Dicty World Races. These worldwide competitions challenge researchers to genetically engineer and pharmacologically enhance the model systems to compete in microfluidic racecourses. These races bring together technological innovations in genetic engineering and precision measurement of cell motility. Fourteen teams participated in the inaugural Dicty World Race 2014 and contributed cell lines, which they tuned for enhanced speed and chemotactic accuracy. The race enabled large-scale analyses of chemotaxis in complex environments and revealed an intriguing balance of speed and accuracy of the model cell lines.”

And here’s video of one of the winners:

(Thanks to Tony Tweedale for bringing this to our attention.)

Posted by Marc Abrahams on Saturday, June 25th, 2016 at 6:01 pmunder Arts and science, News about research.

Now that you registered, what next? 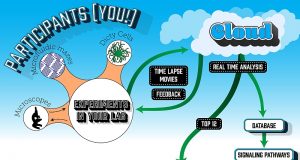